Seat and group your season ticket holders and their guests

Pin seats to a current order

In order to guarantee that your audience members are sitting next to who they want to be, you can now temporarily “reserve” seats on the seat map. For example, during a season ticket campaign, you can easily seat your season ticket holders and their guests, as well as holders of different season ticket types, side-by-side.

During the seat selection process in the ticket office, you can now “pin” one or several seats to the current order (highlighted in green). This temporary “pre-booking” lets you link a season ticket to a single ticket or to a season ticket seat and to enable your season ticket holders to sit next to who they want to. 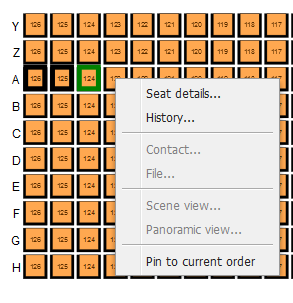 Once pinned, these seats can be used as part of a season ticket or as single tickets.

Remaining pinned seats that are not used as part of a season ticket or a single ticket will be automatically released when the order in question is completed or abandoned. Operators can, of course, also unpin seats manually from the seat map without waiting for the current order to be completed.

Navigate between sessions as part of a season ticket type

Is your season ticket campaign a resounding success, meaning that the best seats for some sessions have been snapped up? Navigate easily from one seat map to another to find the session where the seats you want are still available.

Just like how you can switch session while buying a single ticket, you can now select another available session for a given season ticket type when choosing seats for the season ticket.

For both bookings and sales, you can now assign new seats for audience members simply and quickly by opening the “seat map” menu or accessing it from the customer file. New seats can also be assigned from the “sales” seat map after the reservations have been resumed in the sales cart.

Note that the function to assign new seats is available for single tickets as well as events as part of a season ticket or package.

From the “seat map” menu

For sold seats, select the seats to reassign and then launch the exchange process by clicking on “Cancel/exchange”. The seats to be cancelled are highlighted in grey. You can then choose the desired seats and confirm the selection. The exchange is concluded directly from this screen, and the reassignment is completed.

For a season tickets, the new selected seats are linked to the season ticket automatically, provided that the category and amount correspond to the original seats.

For reserved seats, the first step is to restart them by clicking on “Pay”. Just deselect the seats to be cancelled and then choose the new seats, and confirm the selection. The order is completed straight from this screen, whether through the payment button or the “Complete” button.

From the sales cart

When a season ticket or a reserved package is resumed, you can access the seat map in the same way as for single tickets and complete the exchange straight from the plan.